This is my twenty fourth entry for Sunshine’s Macro Monday by my dear friend Irene. Here’s the link to Irene’s blog 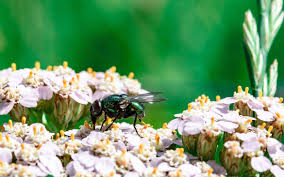 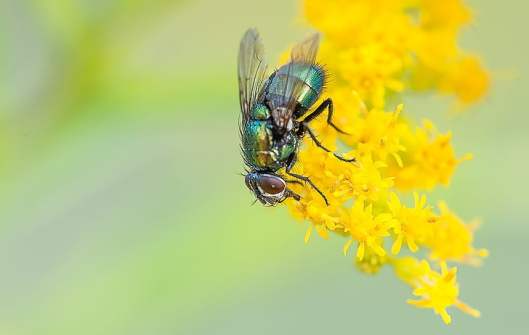 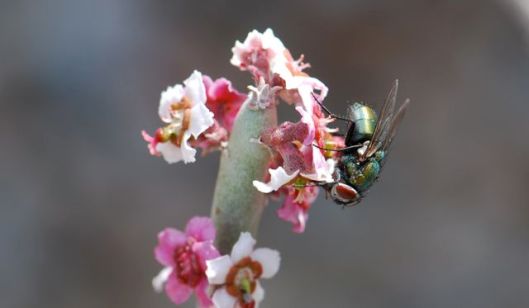 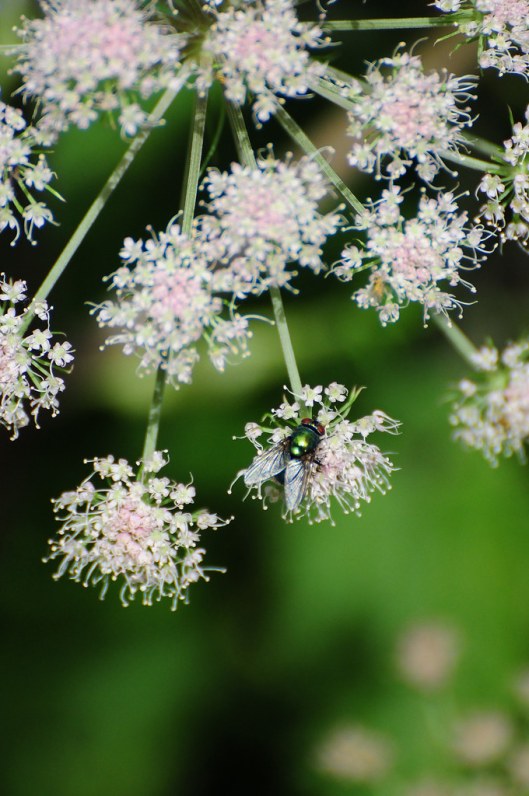 The common green bottle fly (Lucilia sericata) is a blowfly found in most areas of the world and is the most well-known of the numerous green bottle fly species. Its body is 10–14 millimetres (0.39–0.55 in) in length – slightly larger than a house fly – and has brilliant, metallic, blue-green or golden coloration with black markings. It has short, sparse black bristles (setae) and three cross-grooves on the thorax. The wings are clear with light brown veins, and the legs and antennae are black. The larvae of the fly may be used for maggot therapy, are commonly used in forensic entomology, and can be the cause of myiasis in livestock and pets.

Spearmint is also known as garden mint, common mint, lamb mint and mackerel mint, is a species of mint, Mentha spicata, native to Europe and southern temperate Asia, extending from Ireland in the west to southern China in the east. It is naturalized in many other temperate parts of the world, including northern and southern Africa, North America and South America. It is used as a flavouring in food and herbal teas. The aromatic oil, called oil of spearmint, is also used as a flavouring and sometimes as a scent. Spearmint produces flowers in slender spikes, each flower pink or white in colour, 2.5–3 mm (0.098–0.118 in) long, and broad. Spearmint flowers in the summer (from July to September in the northern hemisphere), and has relatively large seeds, which measure 0.62–0.90 mm (0.024–0.035 in). The name ‘spear’ mint derives from the pointed leaf tips.

Solidago, commonly called goldenrods, is a genus of about 100 to 120  species of flowering plants in the aster family, Asteraceae. Most are herbaceous perennial species found in open areas such as meadows, prairies, and savannas. They are mostly native to North America, including Mexico; a few species are native to South America and Eurasia. Some American species have also been introduced into Europe and other parts of the world. The flower heads are usually of the radiate type (typical daisy flower heads with distinct ray and disc florets) but sometimes discoid (with only disc florets of mixed, sterile, male and bisexual types). Goldenrod is the state wildflower of my birth state South Carolina.

Apiaceae or Umbelliferae is a family of mostly aromatic flowering plants named after the type genus Apium and commonly known as the celery, carrot or parsley family, or simply as umbellifers. It is the 16th-largest family of flowering plants, with more than 3,700 species in 434 genera including such well-known and economically important plants such as ajwain, angelica, anise, asafoetida, caraway, carrot, celery, chervil, coriander, cumin, dill, fennel, poison hemlock, lovage, cow parsley, parsley, parsnip and sea holly, as well as silphium, a plant whose identity is unclear and which may be extinct. The flowers are usually perfect (hermaphroditic) and actinomorphic, but there may be zygomorphic flowers at the edge of the umbel, as in carrot(Daucus carota) and coriander, with petals of unequal size, the ones pointing outward from the umbel larger than the ones pointing inward. Some are andromonoecious, polygamomonoecious, or even dioecious (as in Acronema), with a distinct calyx and corolla, but the calyx is often highly reduced, to the point of being undetectable in many species, while the corolla can be white, yellow, pink or purple. The flowers are nearly perfectly pentamerous, with five petals, sepals, and stamens. The androecium consists of five stamens, but there is often variation in the functionality of the stamens even within a single inflorescence.

Allium, also called Ornamental Onion, is one of the most interesting blooms in the spring and summer garden. With a spherical shape that holds its form throughout the season, it’s one of the longest lasting blooms to be had from a bulb. You’ll find many variations in color, height and form – all are highly attractive to pollinators and very deer resistant. Use Allium in repetition throughout the landscape to add a sense of cohesion to your beds. Allium is a genus of monocotyledonous flowering plants that includes hundreds of species, including the cultivated onion, garlic, scallion, shallot, leek, and chives. The generic name Allium is the Latin word for garlic, and the type species for the genus is Allium sativum which means “cultivated garlic”.