This is my my fourth post for Linda’s One Liner Wednesday Challenge. This week’s challenge is Like one of your French Girls or just random funny and inspirational one liners. Here’s a link to Linda’s blog.

Here a picture of a mug that I have. 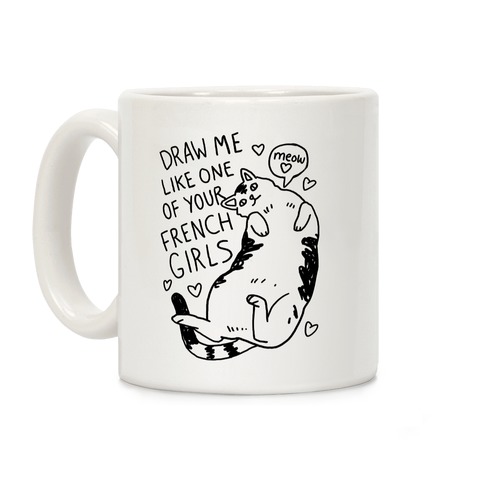 The phrase did not gain much traction until years later on January 7th, 2011, when Tumblr user meguhime added the caption on a photo of a plump pug dog (shown below) originally taken by Flickr user mylulabelles.

Additional image macros can often be found on the microblogging site Tumblr under the tag “#draw me like one of your french girls.”

Tumblr – Posts Tagged “draw me like one of your french girls

Some iconic one-liners from movies

“If you look for it, I’ve got a sneaking suspicion… love actually is all around.” Love Actually, 2003.

“The greatest thing you’ll ever learn is just to love and be loved in return.” Moulin Rouge, 2001.

“I love you, but you have no idea what you’re talking about.” Moonrise Kingdom, 2012.

“You will always remember this as the day that you almost caught Captain Jack Sparrow!” Pirates of the Caribbean: The Curse of the Black Pearl, 2003

“Then how are you this evening…Mrs. Darcy?” Pride and Prejudice, 2005.

Some funny and inspirational one liners

“Mothers are fonder than fathers of their children because they are more certain they are their own.”

“Silence has many beauties.”

“The sun is new every day.”

“He who would eat the kernel, must crack the shell.”

“The only lasting beauty is the beauty of the heart.”

“I think it’s wrong that only one company makes the game Monopoly.”

“I looked up my family tree and found out I was the sap.”

“I can’t wait till Sunday, I’m gonna see my favorite niece and my other niece…”

“Silly things do cease to be silly if they are done by sensible people in an impudent way.”

“For most of history, Anonymous was a woman.”